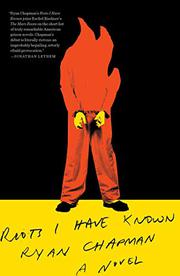 RIOTS I HAVE KNOWN

A hyperliterate prisoner who is barricaded in his sanctuary while a riot unfolds writes his last words.

Well-versed pop-culture writer Chapman (Conversation Sparks, 2015) offers a debut novel that is as eccentric as it comes but also fitfully funny and murderously wry in its humor. Our imprisoned narrator is, as happens in a lot of transgressive comic novels, nameless but for his prison moniker, “MF.” There’s really no character here—we only learn our nameless narrator is an immigrant from Sri Lanka whose previous gig was working as a doorman in New York City—but he serves as a convenient cipher who allows the author to wax poetic about the role of literature in society and the blunt cruelty of the American prison system while enabling his capricious doppelgänger to pen arch reminiscences of his paramours. These include the now-bitterly despised Betsy Pankhurst, with whom, in a flashback, the narrator has an intimately described conjugal visit, and a fellow prisoner named McNairy, with whom he has what he calls a “meet-cute.” It turns out that our narrator is the editor of a popular prison journal aptly dubbed The Holding Pen, and apparently one of his missives has triggered the very riot that now threatens his life. The book is purposefully messy—the prose is breathless, meandering, and riddled with pop-culture references and responses to real-time events on platforms like Instagram and Reddit, which the narrator has access to as editor of the paper—but Chapman demonstrates an arch humor that mimics French existentialism as much as it does traditional American satire. It’s even easy to gain an odd affection for our superarrogant narrator despite his supercilious tone and his sentence, which is, as we learn late in the game, for doing something genuinely terrible. This is certainly not a book for casual readers, but those who appreciate a genuinely original stylist and acidly dark humor will find it an odd treat.

A frenzied yet wistful monologue from a lover of literature under siege.