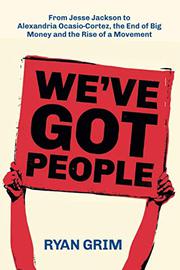 A political book offers a history of the populist left in America from 1988 to the present.

As Joe Biden leads the Democratic primary field, some voters may recall his first, failed campaign for president back in 1988. But Grim (This Is Your Country on Drugs, 2009) argues that the most influential candidate in that race was not Biden or even the ultimate Democratic nominee, Michael Dukakis. Rather, it was the man challenging Dukakis from the left, the civil rights leader and minister Jesse Jackson. Though Jackson ran a competitive but unsuccessful campaign, his call for a “Rainbow Coalition” of voters from across the racial and gender spectrum in order to confront the “economic violence” that affected them all proved prophetic of leftist politics to come. The unexpectedly popular 2016 campaign of Bernie Sanders and the subsequent election and celebrity of progressive candidates like Alexandria Ocasio-Cortez have reshaped the Democratic Party and revealed widespread dissatisfaction with America’s racial and economic status quo. With this book, the author tracks the development of these ideas across the last three decades, from moments of centrist dominance—and sabotage—to glimmers of true reform. A seasoned journalist, Grim delivers prose that is smooth and often gripping, even when describing floor votes involving U.S. Representative Bart Stupak: “In March, Stupak and his gang of anti-choice dissidents eventually came around to a compromise on abortion and voted in favor of the bill. During the floor debate, a Republican shouted ‘baby killer’ at Stupak while he spoke.” The complexity of the political process really shines through—inattentive readers may at times lose the thread—but the author is able to show how each event relates to his central argument. Grim has a clear agenda and ends by warning voters to stop being pundits and vote for the politicians they actually admire: economic progressives such as Sanders and Elizabeth Warren, not moderates like Biden whom they perceive to be electable. Even so, this behind-the-scenes account of the internal struggles within the Democratic Party will be of interest even to those who don’t have red roses in their Twitter profiles.

A thoroughly researched and ultimately persuasive telling of how the Democrats arrived at their current crossroads.