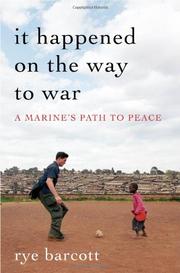 IT HAPPENED ON THE WAY TO WAR

A Marine's Path to Peace

Barcott's accomplishments—he's a retired Marine Corps captain and co-founder of a nonprofit organization serving Kenyan youth—provide the background for this debut memoir.

The author’s father, a Vietnam veteran who won a Bronze Star and a Purple Heart, was a powerful role model for his son, and his mother, an anthropologist, was also important in shaping his worldview. When he was 14, Barcott joined his parents on a trip to Africa, which opened his eyes to the harsh reality of poverty. Five years later, he was studying Swahili at the University of North Carolina on a Marine scholarship in the hope of returning to Africa. At that time, before 9/11 and the launching of the War on Terror, Barcott expected that, as a Marine, he would be involved in humanitarian assistance and peacekeeping missions during his 8-year obligatory service. As it turned out, he was also put on active duty in Iraq. After his junior year, he received a grant to spend the summer in Kenya to research the effect of ethnic conflict on youth living in Africa's largest slum, Kibera. Living there, he shared food and lodging with his new friends. He writes movingly that he had “unique access to remarkable people,” who had a strong sense of community and were struggling to survive. Eventually, Barcott decided to partner with two of the people he met there to set up a mentoring program and to establish a community health service. In 2002, the organization became Carolina for Kibera. After graduating from UNC, he became an active-duty Marine. Despite his doubts about the Iraq war, he admits to a fascination with his own destructive impulses in the heat of battle.

A thoughtful examination of the nature of service and the effects of violence on the human spirit.