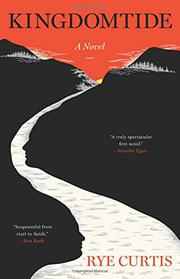 A bitterly unhappy forest ranger finds a purpose in her search for an old woman who might have survived disaster in this darkly humorous debut novel.

In 1986, a small plane crashes on a blue-sky day into a peak in the Bitterroot National Forest, a 1.6-million-acre wilderness straddling Montana and Idaho. The only survivor is 72-year-old Cloris Waldrip, who's on vacation with her husband of 54 years. Alone and traumatized, she’s determined to make her way home to Texas. At the start she’s a nice Methodist lady who pulls up her stockings and retrieves her handbag from the wreckage before setting off down the mountain, but her civilized layers will be peeled away by weeks, then months of harsh conditions and loneliness. Bitterroot forest ranger Debra Lewis is recently divorced (after finding out her husband had two other wives—“He’s in prison for trigamy”) and hell-bent on drinking herself to death. But finding Cloris, who she believes survived the crash, becomes her mission. Through it she meets a widowed search-and-rescue specialist named Steven Bloor and his sullen teenage daughter, Jill. Chapters recounting Cloris’ struggle to survive alternate with those describing Lewis’ search and her entanglement with the Bloors. Cloris’ chapters are by turns thrilling, poignant, and hilarious, carried along by her irresistible first-person narration. She is so matter-of-fact, wry, and indomitable it’s not hard to imagine she’s a granddaughter of True Grit’s Mattie Ross. Lewis’ part of the story is less engaging, in part because its third-person narration lacks Cloris’ winning voice. Lewis’ work life is oddly more outlandish than Cloris’ wilderness journey; so many wacky colleagues and eccentric locals jostle for space with the weird Bloor family that the Fargo-esque humor can seem strained. And Lewis’ alcoholism is so prodigious that, after she’s guzzled six or seven bottles of wine in one day, it’s hard to credit her staying conscious, much less driving mountain roads. But both she and Cloris find paths to self-discovery, and eventually some will be saved.

A captivating survival story alternates with a less satisfying look at a midlife crisis in this promising first novel.