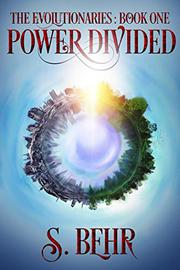 In Behr’s debut YA fantasy novel set thousands of years into a post-apocalyptic future, a princess comes of age in a divided society.

After an ice age killed billions and destroyed most of the world, humanity lived on in specially created colonies populated by either “Evolutionaries”—genetically modified people with extraordinary powers that helped them survive the hardships of the long winter—or “the Hg-1,” the surviving original humans, “with no known abilities.” Long ago, a conflict resulted in the Hg-1 leaving the colonies and the Evolutionaries entering a new era of peace and prosperity in Amera (the former United States). Seventeen-year-old Violet is a Legacy Princess of Neyr, one of Amera’s nine realms, and she has two secrets: Her powers aren’t fully developed, and she’s heard a male voice in her head for as long as she can remember. On the day of her Criterion, “the test that all citizens of the Realms of Amera have to take to prove their worth,” something goes terribly wrong, resulting in carnage and causing her to run away in fear and self-blame. She stumbles into a buried facility that’s controlled by a friendly, if sometimes-snarky, artificial intelligence, and finds out important information that she knows that she must share with her family back home. She soon learns that many things that she thought she knew are actually lies. Then old enemies return to the colonies, and peace talks descend into chaos. This first volume in the Evolutionaries series skillfully balances intriguing worldbuilding, whose details are slowly revealed, with well-paced action sequences. It also ably handles Violet’s character development along the way while also offering a diverse, lovable supporting cast whose members become the protagonist’s close friends and allies. The novel effectively addresses themes of cooperation and isolationism as well as autonomy, consent, and moving on with one’s life after learning of long-held secrets. Frustratingly, however, the future society is strangely old-fashioned and heteronormative—the one truly jarring aspect of an otherwise strong debut.

A notable and thoughtful addition to the crowded shelf of post-apocalyptic YA novels.