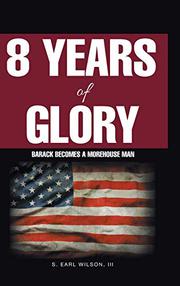 A concise and laudatory overview of Barack Obama’s presidency.

An alumnus of Morehouse College, Wilson (It’s Cotton Blossom Time, 2010, etc.) “always thought that if any black scholar should become President of the United States of America, it would be a Morehouse College graduate. Nobody else is qualified.” In that spirit, the centrality of Morehouse to African American experience (including a nearly 30-page overview of its distinguished graduates) is a theme in this otherwise eclectic tribute to President Barack Obama (a graduate of Columbia and Harvard Law School). At first dismissive of Obama’s swift rise to fame, Wilson soon changed his mind and in this book offers an unconventional biography of a man he loves: a basic sketch of Obama’s life and work through short essays, poetry, revealing vignettes from Obama’s time in the White House, and reproductions of his most important speeches. The book is at its best when Wilson evokes the pride African Americans nationwide felt about having a black family at their nation’s helm. In his reflections on one of Obama’s inaugural balls, for example, Wilson describes the “enchanted moment” of watching Barack and Michelle dance to Motown classics. Though accomplished first ladies had appeared at earlier balls, “nothing could replace the black beauty of Michelle.” Other musings deal with Obama’s athleticism, humor, love of food, religion, and other cultural markers that made him not just a personally beloved, but distinctly black president. In 2013, Obama received an honorary degree from Morehouse, proudly joining Wilson’s illustrious list of “Morehouse Men.” Obama’s fans, particularly those drawn to his roots in the African American experience, can revel in the author’s passionate poetry and prose that is constant in its affirmations of Obama. Some, however, may find the work too hagiographic, refusing to even acknowledge criticisms of Obama from the philosopher Cornel West (and other within African American community) for his close ties to Wall Street, his handling of immigration, and foreign policies that some see as militaristic.

An adoring and unquestioning celebration of Obama’s presidency.