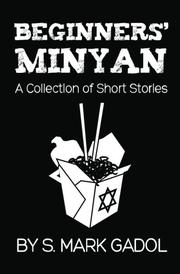 A Collection of Short Stories

“Minyan” is the Hebrew word for a quorum of 10 Jewish adults, which is required for some religious obligations and ceremonies, the most common being public prayer. These 10 stories are the author’s attempt to come to terms with his heritage. In “Treyf Day,” a daughter’s relationship with her mother is laden with religion, guilt and the weight of Jewish law, which (her mother tells her) forbids sleepovers and the wearing of rhinestones. “Villa Puesta Del Sol” examines life in a Florida retirement community, where a woman who eats paper also jockeys for position in a mahjong circle and uncovers the secret to the brisket recipe of a deceased acquaintance. “What’s Up, Kike?” features a young lawyer who uses derogatory terms to refer to Jews; he eventually comes to realize that he’s not mature enough for parenthood. In “The Coup,” a Jewish boy ensures that his father’s place in a congregation is secure from the threat of an interloper. In each of Gadol’s stories, the writing is clear, crisp and concise. The collection’s unifying theme is reflecting upon life as a Jew: the importance of story, tradition, law, family, ceremony and guilt. Stories range from inventive (“the story ends...with four knives stuck in a ficus, and me forbidden to wear mohair”) to humorous (“The only difference between Rice-A-Roni with fried beef in America and in Africa is that we don’t have flies crawling on our faces here”). Some passages are exquisitely beautiful, particularly the story “M’Dor L’Dor,” in which a father reflects upon the meaning of his daughter’s Bat Mitzvah by recalling his boyhood chrysalis. At times, however, this beauty is achieved at the expense of the stories’ pacing.