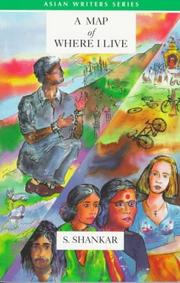 A MAP OF WHERE I LIVE

A beautifully rendered if often attenuated first novel about social disintegration in India and in a contemporary Lilliput. Mixing fable and reportage, Shankar (now teaching at Rutgers Univ.) describes two superficially different societies: Madras, a Tamil-speaking city in India, and the land of Lilliput, first described, of course, by Swift in Gulliver's Travels. The two, it turns out, have much in common, and the alternating accounts by two very different characters create an impressively nuanced portrait of neototalitarian societies. In both states, leaders mouth platitudes about the people's good while lining their own pockets, dissidence is violently suppressed, and thugs rule the streets. The Madras narrator is C. Ramakrishnan, usually known as RK. Back from the States with a master's degree, he's marking time until he begins law school. The narrator of the Lilliput tales is Valur Vishveswaran, a modest, fearful, rather odd figure. To pass the time, RK becomes increasingly involved in a local political campaign. Shanthamma, a noted labor organizer, has decided to run against the party machine in the upcoming elections, but as RK and others try to help her, her opponents turn violent. Shanthamma is murdered, and when the authorities try to suppress the investigation into her murder, riots break out. Pressure mounts to see justice done. Meanwhile, alone in his room, Valur records how old papers he discovered led him to Lilliput, which, he realized only dangerously late, was a chilling police state in miniature. Both man and nature were held under strict control: Forests were destroyed to make model cities, and all dissent was forbidden. Soon in trouble, Valur flees with Fargo Withrun, whose dissident lover has been killed. An ambitious political allegory that sets the scene and makes the point, but at last fails to take flight. The two tales never entirely mesh, and the anger at human perfidy remains curiously muted.