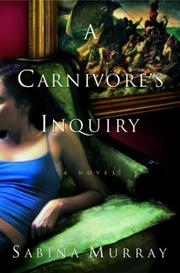 Another tedious road journey across America as a tiresome narrator searches for spiritual nourishment.

A sinking feeling sets in when Katherine, narrator, looks down the American highway and sees “nothing but a nation plunged in darkness” and then defines as an American “one who can achieve the needs of his or her appetite.” Little follows to support or freshen the overworked theme that Murray (Slow Burn, 1990) thus establishes. Flying home from Europe, Katherine filches her seatmate’s copy of Vanity Fair. Her smirking attitude makes a reader wish her fellow passenger would throw a soft drink in face and tell her to get a life. Instead, Katherine heads to New York City, where she hooks up with the equally unappealing Boris Naryshkin, author of “depressing books” like Soulless Man. Katherine spends a great deal of time eating, her hunger stimulated, it appears, from an obsession with cannibalism. Periodically, she segues into excruciatingly detailed descriptions of the Donner Party, the Packer expedition, and the tales of cannibalism behind Gericault’s The Raft of the Medusa. Readers who haven’t already jumped ship will follow Katherine’s rootless life as she heads across America, down to Mexico, then back to the East Coast. But rather than having her look outward at the land—thereby developing her broad thesis—Murray has her obsessively turn inward. Clues gradually emerge that Katherine’s bizarre preoccupations stem from life with a violent mother who once laced with prescription medications the Halloween candy she handed out to her daughter’s friends. Repellant violence attends every step of Katherine’s journey (a coyote eats a truck driver alive), leaving her to wonder whether she’s the victim of an overactive imagination. Few answers follow, as Katherine stands “on the side of the road, alone and deserted.”