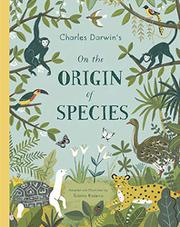 CHARLES DARWIN'S ON THE ORIGIN OF SPECIES

An introduction for younger readers to the major ideas in a seminal work of science.

Radeva, a graphic designer with a background in molecular biology, uses a combination of simply phrased statements and short quotes to boil down Darwin’s main notions about variety among both wild and domesticated animals, the struggle for existence that drives the process of natural selection, the development of instinct and of complex organs over long spans of time, and the anatomical resemblances in seemingly disparate species that point to common ancestries. Studiously avoiding mention of religion (“For most of human history, many people believed that everything on the world was created all at once”), she sketches out the genesis of Darwin’s thesis with nods to Buffon and Lamarck, brings his theories up to the present with discussions of epigenetics and other recent evolutionary insights, then closes with rebuttals to select “Misconceptions” about Darwinism’s precepts. Opening and closing with dozens of labeled butterflies and other insects on the endpapers, the illustrations feature gatherings of naïve-style flora and (mostly) fauna, drawn in minimal but precise detail and lit with bright, clear colors. Human figures—beginning with Adam and Eve in leafy garb and ending, except for a few vignettes, with an evolutionary line leading up to the white-bearded scientist himself—default to white.

Cogent review of some landmark ideas, now seemingly obvious but once revolutionary.