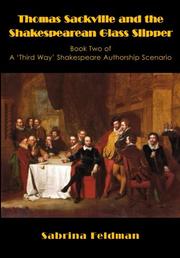 From the A 'Third Way' Shakespeare Authorship Scenario series, volume 2

An argument in favor of Thomas Sackville as the author of Shakespeare’s plays and poetry.

In this follow-up to The Apocryphal William Shakespeare (2011), Feldman expands on her contention that Elizabethan courtier Thomas Sackville, Lord Buckhurst, is the actual author of the plays and sonnets generally associated with William Shakespeare, while the actor William Shakespeare was actually responsible for a group of lesser plays mostly ignored by historians and critics. The book establishes 60 “attributes” that define the author (“Knowledge of the 1575 Kenilworth Festivities,” “Attracted to Both Magnificence and Simplicity”) then proceeds to find textual evidence for each attribute in Shakespeare’s writings, along with evidence that these clearly apply to Sackville. One chapter addresses each attribute’s applicability to writer Shakespeare, positing that few, if any, can be conclusively applied to the actor. The author is clearly knowledgeable about her subject, and she details her sources in an appendix of chapter notes, though as with The Apocryphal William Shakespeare, the format of the references makes it difficult to connect citations to the body of the narrative. While the idea that Thomas Sackville wrote Shakespeare’s plays may require too many assumptions and inferences to persuade the reader, Feldman is unquestionably convincing as a proponent of the pleasures of exploring the works from a new angle, “discovering how many lesser known and seldom performed Shakespearean works take on an entirely new interest and meaning from a Sackvillian perspective.” The arguments in favor of Thomas Sackville are unlikely to put an end to the ongoing debate over Shakespeare’s true identity, but Feldman has presented an engaging new perspective that gives Stratford-ian skeptics a strong new contender for the man behind the works.

An enthusiastic and unique assessment of the Shakespeare authorship question that, while still leaving the debate unresolved, may convince even open-minded Stratford-ians of the plausibility of its analysis.