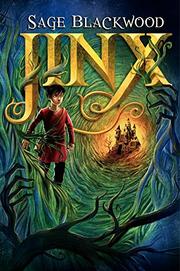 Making unusually entertaining use of well-worn elements, this series opener plops a dense but promising young wizard-in-training between a pair of obnoxious rival mages.

Left by his stepparents to die in the dangerous Urwald, Jinx is rescued by Simon Magus, a “possibly evil” forest-dwelling wizard whose obsession with magical research is matched only by a truly profound lack of people skills. Several years later, having learned a little magic but also injured by one of Simon’s spells, Jinx stomps off in a rage to seek help. But hardly has he fallen in with a couple of ensorcelled fellow travelers, than all three fall into the clutches of the genial but rightly feared Bonemaster. Along with setting this adventuresome outing in a sentient forest populated by trolls, werewolves and giddy witches who bound about in butter churns, the pseudonymous Blackwood spins out lively dialogue threaded with comical rudeness and teasing. Trotting out a supporting cast whose inner characters are often at thought-provoking odds with their outer seeming, she also puts her central three through a string of suspenseful, scary situations before delivering a properly balanced closing set of resolutions, revelations and road signs to future episodes.

Unsurprisingly, Jinx displays hints of developing powers beyond the ordinary. Astonishingly, he and his world still seem fresh, for all that they echo familiar tropes.