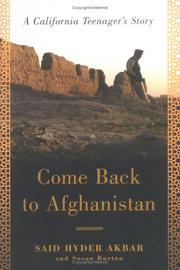 COME BACK TO AFGHANISTAN

What did you do over summer vacation? Akbar spent his—actually three of them—in Kunar, Afghanistan, with his father, a repatriated Afghan who happened to be tight with President Hamid Karzai.

The 20-year-old author first told his story on NPR’s This American Life—and quite an American life it’s been. Akbar grew up in California, where his father sold hip-hop–style clothing. Following 9/11 and the subsequent dismantling of the Taliban, Akbar’s father, who had left Afghanistan for Pakistan and ultimately America after the Soviet invasion of 1979, went straight home, where he became Karzai’s spokesman and, soon after, governor of the rural province Kunar. Akbar, then a high-school senior, took his exams early and skipped the prom so that he could join his father as soon as possible. Although he’d never traveled to Afghanistan before, he felt an immediate attachment to the country. On his first trip, he brought along his beloved collection of U2 CDs, and, for his father, dress socks, Krazy Glue and Tylenol PM, rarities in Kabul. Akbar attended a traditional wedding celebration; listened in on some of his father’s political meetings; dealt with suspicious security guards upon arrival from the U.S.; discussed ’80s music with American soldiers; learned to shoot; was falsely accused of smuggling gems; ogled famous Afghan writers; and visited, as a “tourist,” Osama bin Laden’s house. Refreshingly, what Akbar did not do was feel—or at least demonstrate here—much angst over what could have been conflicting identities. With the help of Harper’s editor Burton, Akbar achieves a level of artistry that co-authored works rarely even approach.

An exceedingly, commendably unique eyewitness account of a country in transition, told by a charming young narrator.