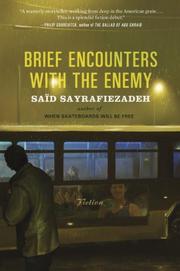 BRIEF ENCOUNTERS WITH THE ENEMY

It turns out that war is more boring than hell in these tangentially connected short stories from the author of the memoir When Skateboards Will Be Free (2009).

The author’s collection feels very much like a product of work created for the audiences of the New Yorker and Granta, publications to which he contributes. While the stories aren’t strictly linked to each other, it’s obvious that they’ve been set in the same world, although Sayrafiezadeh goes to great pains to strip his milieu down to a pure, abstract canvas. The stories are set in a world at war, or wars, somewhere on a peninsula. It’s not always clear which country each story is set in, either, although the United States is clearly identified as one of the combatants. The centerpiece is “A Brief Encounter with the Enemy,” during which an American serviceman named Luke finally finds a way to break up the tedium of war. But the story is a rare jab to readers who may be put off by the obscurity of the rest of the collection. Many of the stories, such as “Cartography” and “Appetite,” deal with characters who are not living up to their potentials, toiling in dead-end jobs. Others, like “Enchantment” and “Operators,” examine the aftermath of war with a perplexing simplicity for a writer who is clearly capable of deeper insights. The soldier in “Enchantment” is particularly disappointing, as he waits for a class of prep school students to recognize that “We won” is the right answer to his question: “I’d hold nothing back and they’d be spellbound. Death by drowning, by burning, by whatever means we had available. That was how we won the war.”

An interesting experiment in nontraditional fiction but a somewhat disappointing follow-up from a talented new voice.