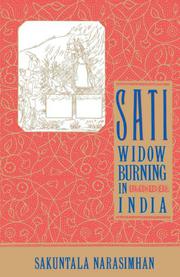 When 250,000 people gathered in 1987 in the Indian town of Deorala to watch an 18-year-old widow immolate herself on her husband's funeral pyre, achieving glory for herself and honor for her family, the Indian government passed yet one more law against the immolation ritual of sati. The power of this brutal rite—its economic, political, and social significance—is the major concern here of acclaimed Indian journalist Narasimhan. There is no scriptural basis for sati in any Hindu text, but since A.D. 370, when it first appeared in India, it has acquired religious status and, though it was officially outlawed in 1829, is often defended on the grounds of religious freedom. In fact, Narasimhan contends, sati reflects the persistent trivialization of women: often aborted simply because they are female, or abandoned after birth, seldom educated, exchanged in childhood marriages, secluded in purdah for most of their lives, married for their dowries or murdered if their dowries are insufficient—women, in addition to all this, are, upon the death of their husbands, encouraged to destroy themselves in order to avoid being burdens and to release their husband's inheritance for their children. If they agree, they are celebrated; if they don't, they are often coerced into sati or are ostracized. Fear, male domination, tradition, lack of alternatives in a society that does not allow widows to remarry, fascination with the mystique, or simply the opportunity to appear heroic in a life of degradation—each may convince women, some highly intelligent, to perform sati, which, in turn, enhances its power. Narasimhan recognizes the irony: How can an essentially pacifist society, one that discourages the sacrificing of animals, burn women alive and justify it? Clearheaded, informed, and persuasive, Narasimhan makes her points with a quiet yet powerful indignation. (Eight-page photo insert—not seen.)