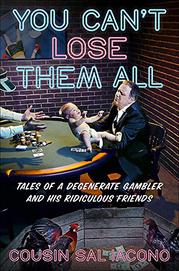 YOU CAN'T LOSE THEM ALL

A rollicking, often silly account of the foibles of a man who’ll bet on anything.

Cousin of Jimmy Kimmel, who provides the foreword, and a writer and sketch actor on the show, Iacono betrays his own title over the course of his conversational, goofy narrative. As it turns out, you can lose them all, or at least most of them: “baseball, basketball, hockey, wrestling (pro and amateur), hot dog–eating contests, horse races, dog races, bird races, presidential elections, all levels of football—including my 8-year-old son’s flag league and, of course, the Puppy Bowl.” The author has bet on them all as well as a particularly unfortunate event in which he hid a pile of linguine in his shoes in order to win an all-you-can-eat dinner: “I sacrificed a $75 pair of Nike high-tops for a $36.95 meal.” The economy of gambling dictates that such betting is to be avoided, at least over the long haul. It’s to Iacono’s good fortune that the bookies he lost to seem to have been forgiving types: One put him to work refereeing youth basketball games at a rate of pay so low that “I would be done paying off my debt when the children reached thirty-seventh grade.” Does he regret it? Not a bit, except perhaps for those moments when his body rebelled against the paces he was putting it through; the last image in the book involves the application of oysters in a way that may have the reader steering clear of shellfish for a while. On the whole, though, Iacono is funny, rueful, and frequently instructive, as when he teaches the technique (and ultimate folly) of hedging a bet: “Remember this rule of thumb: the more bets you place, the better off for the house.”

If you’re thinking of taking up gambling, Iacono will turn you to needlepoint or square dancing inside a few chapters.