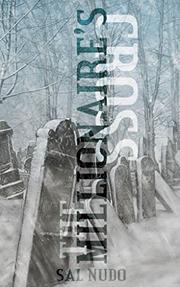 Alex Neitzel’s annual trip with little brother Trevor to visit the spot where their sister killed herself takes an unexpected turn. Alex’s car dies, and the men, along with Trevor’s partner, Chad, are stranded. At a nearby cemetery, they help the elderly David Kendrick, who had collapsed. David thanks them with an offer of $50 each if they simply mail a letter for him, promising more money later for more favors. The next one, though, is a doozy—kill David’s wife, which he claims will be a mercy killing—but the pay is commensurate with the request, $5 million to split three ways. The guys seem reluctant but soon are on a trail of lies and murder, especially because $5 million goes a lot farther if it’s split just two ways or not at all. The author’s methodically paced (but never plodding) novel establishes its tone early. David is immediately unnerving. Alex seems like the levelheaded one of the trio, chauffeuring the couple, who are more interested in getting high than finding a way home. Plot twists abound. The initially likable protagonist, with his pregnant wife, Emily, at home, gets decidedly unlikable as the story progresses. But with each appalling act, the characters grow increasingly fascinating. There are so many shocks in Nudo’s book that readers are bound to guess at least some of the developments. But Nudo knows to keep the plot spiraling while allowing a startling event to resonate before the next one occurs.

Like a familiar roller-coaster ride; readers may see where the story’s headed but that doesn’t make it any less exhilarating.