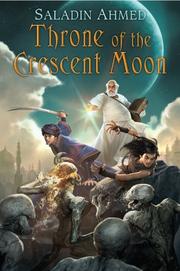 THRONE OF THE CRESCENT MOON

In Dhamsawaat, chief city of the Crescent Moon Kingdoms, Doctor Adoulla Makhslood has devoted his life to hunting and destroying ghuls, constructs brewed from bones, sand and bugs and animated by the vile blood-magic of evil sorcerers. Now fat, old and weary, Adoulla endeavors to ignore the power struggle developing between the cruel, despotic, aloof Khalif and the elusive, magic-powered Robin Hood-style thief who calls himself the Falcon Prince. But when the family of his old flame-turned-brothel keeper Miri is slaughtered by ghuls, Adoulla sets aside his teacup, summons his young assistant, Raseed, a deadly but naive warrior dervish steeped in the religion of his sect, and by the will of God steels himself for another battle. Tracking the ghuls into the desert, Adoulla and Raseed come upon a young girl, Zamia, whose entire family have also been slaughtered by the ghuls. Zamia, a shapeshifter who can take the form of a huge golden lioness with silver claws, proves more than adept at killing ghuls, but her femininity and forwardness deeply trouble the pious and traditional Raseed. Equally disturbing to Adoulla is the sheer sorcerous power necessary to create such terrible ghuls, and indications that the Falcon Prince is somehow involved. Adoulla, while no fan of the vicious Khalif, refuses to endorse a disastrous civil war. As you might expect, the Arabian Nights theme dominates, and in language, style and approach, Ahmed carries it off with only minor slips into American vernacular. Equally impressive are characters who struggle not only against their opponents but against their own misgivings and desires, and accept that victory may be achieved only at great personal cost.