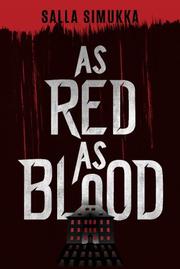 AS RED AS BLOOD

This trilogy opener from a talented young author has a bracing energy that stands up to the most muscular of Scandinavian thrillers and a heroine more than equal to her competition.

Named for Snow White, Lumikki, 17, lives alone in Tampere, Finland, attending a magnet arts school far from her parents and hometown. If her grim childhood still prompts nightmares, it’s also given her important gifts—chief among them, her ability to deflect attention while closely observing those unaware of her. (Lumikki’s sure to draw comparison to Lisbeth Salander, but Peter Høeg’s Smilla is her true sister under the skin.) In her school’s darkroom, she stumbles into (literally) an appalling secret: thousands of dripping euros hung to dry. Despite an evident attempt to cleanse them, they still smell of blood. Within hours, Lumikki’s pulled into a claustrophobic conspiracy with three popular, high-profile students. Meanwhile, a young Russian woman not much older than Lumikki lies dead nearby, at the heart of the mystery into which Lumikki and her classmates are drawn. The starkly powerful opening paragraph of the Grimms’ “Snow White” provides the narrative frame, and it’s no flimsy high concept—rather, Simukka’s onto something: Fairy tales, like mysteries, present uncompromising moral imperatives—no soft, comforting shades of gray for even the youngest readers.

Limned in stark red, white and black, this cold, delicate snowflake of a tale sparkles with icy magic.