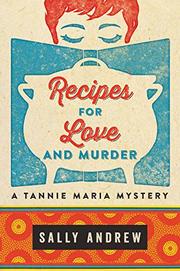 RECIPES FOR LOVE AND MURDER

A South African woman cooks out of love while hoping for the real thing.

Tannie Maria’s mother was Afrikaans, her father English, and her late husband an abuser whose passing she does not mourn. She lives with her five chickens on a small property in the Klein Karoo and writes a recipe column for the Klein Karoo Gazette until her friend and editor, Hattie Christie, tells her that the head office wants an advice column and there’s no room for both the new feature and her recipes. The good news is that Tannie Maria can write the new column. Since the only thing she knows about love concerns cooking, she combines the two in “Tannie Maria’s Love Advice and Recipe Column” and achieves a smashing success. One of the first letters she receives is from Martine van Schalkwyk, whose equally abusive husband has recently shot the ducks she received as a gift from a female friend. The columnist sends advice and a recipe, but neither prevents Martine’s death. Tannie Maria and Jessie Mostert, the ambitious young investigative journalist for the Gazette, decide to investigate, to the consternation of Detective Lt. Henk Kannemeyer, a widower who takes a shine to Tannie Maria but wishes she would stick to cooking. Although Tannie Maria, Jessie, and Anna Pretorius, Martine’s grieving friend, all think Dirk van Schalkwyk killed his wife, the police arrest Anna, whose fingerprints are on the murder weapon. Anna and Dirk, each convinced the other is the murderer, nearly kill each other, but Tannie Maria and Jessie think otherwise.

A delightful debut, tender and funny. The mystery takes on the worldwide problem of abused women while revealing both the beauties and problems of South Africa. And the recipes will make you want to drop everything and start cooking.