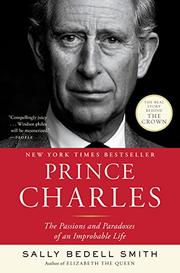 The Passions and Paradoxes of an Improbable Life

A sympathetic psychological study of the prince who has been working tirelessly all his life to be taken seriously.

Having written previously on other members of the modern English dynasty (Elizabeth the Queen: The Life of a Modern Monarch, 2012, etc.), British biographer Smith provides plenty of astute observations in her biography of the Prince of Wales, who is now 68. His 90-year-old mother, Queen Elizabeth II, is finally slowing down and deputizing some of her tasks to her eldest son, although she has no intention of abdicating. After espousing vociferously and often controversially throughout his life on causes he is passionate about—organic farming and other environmental issues, traditional architecture versus modern, creating opportunity and education for disadvantaged youth, alternative medicine and homeopathy, among many others—Charles seems to be toning down his rhetoric in preparation for the establishment of a more disciplined tone, à la his efficient, well-loved mother. Smith is not the first biographer to depict the young prince as love-starved, lonely, and emotionally vulnerable, although her portrait is enormously touching and supported by wide-ranging interviews and research. Elizabeth’s hands-off approach to child-raising, Charles’ father’s bullying, the hypercriticism of the press, and his position of impotence within the royal succession all colluded in pushing him into a disastrous first marriage with a far-too-young, inexperienced, and emotionally damaged soul, Diana Spencer. In fact, he always loved and needed the one woman who bolstered his confidence, listened to him, and shared his pursuits, the married Camilla Parker-Bowles. Indeed, Smith portrays Camilla in a very generous light and Diana as seriously psychologically impaired. Throughout, the author traces the roots of Charles’ many fascinating and beneficial "obsessions"; he was a prescient prince who scorned the playboy label and tried valiantly to do something good with his wealth and connections.

A thorough, timely biography of the man likely to become king in the next decade or so.