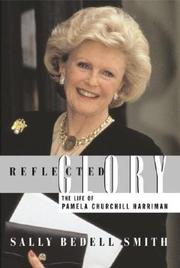 The Life of Pamela Churchill Harriman

The riveting adventure of a red-haired country girl who became, in Smith's characterization, the last of the great courtesans and an internationally recognized diplomat. Pamela Harriman's life is the stuff of romance novels. The seductive heroine dallies with a series of rich and well-born lovers, including not only first husband Randolph Churchill, but American diplomat Averell Harriman, broadcasting legend Edward R. Murrow, millionaires Jock Whitney, Aly Khan, Gianni Agnelli, and Elie de Rothschild. Not the least of her admirers (but not her lover) was Winston Churchill, who was genuinely fond of his daughter-in-law. She in turn played on the Churchill name to bolster a brilliant career on the international social circuit, further enhanced by her marriage to American theatrical producer Leland Hayward. Widowed by Hayward, she married former lover Averell Harriman. After Harriman's death and with his legacy, she used her charm and social skills to become the ``den mother'' of the Democratic Party, earning an appointment as ambassador to France. Relying on many of the same sources but without the sour bite of Christopher Ogden's 1994 Harriman biography, Smith (In All His Glory: William S. Paley, 1990) gives us a portrait of a woman who has left many wounded in her wake (including her neglected son), but who has spent her life, as she wanted to, at the center of power and wealth. She brings Harriman's story up to the present, with a detailed portrait of her acrimonious feud with the other Harriman heirs. Attractive but not beautiful, charming but not witty or well educated, how did Pam do it? As many of her famous predecessors, like Pompadour and de Maintenon, did: With extraordinary determination and by catering to her man. Sure to ruffle the feathers of feminists, but a convincing depiction of an era not very long ago when the only route to the top for a woman of average ability and above-average ambition was in the wake of a man. (32 pages b&w photos, not seen). (First serial to Vanity Fair)