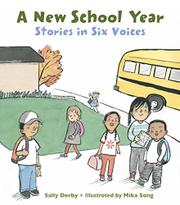 At the start of a new school year, six children tell of their worries, hopes, and growth in 24 free-verse poems.

The book is divided into four sections, with one poem for each of the six children in each section: “The Night Before,” “In the Morning,” “At School,” and “After School.” The children and their situations are quite diverse: Ethan is a blond, white kindergartener who lives with his mom, with his grandpa in a nearby apartment; Zach is a confident black first-grader; shy second-grader Katie’s skin is light brown, and she lives with her mom and grandmother; Jackie is a blonde, white third-grade latchkey kid; Carlos is a Latino fourth-grader whose poems are sprinkled with Spanish; and Mia is an Asian fifth-grader who wears hearing aids. While none of the poems by themselves stands out as anything amazing, the four separate poems each child is allotted combine to paint a picture of a full character: Ethan carries Bear’s jacket in his pocket and draws extra family members since his little triad looks lonesome on the white page. But he resolves to own up and to leave Bear’s jacket at home tomorrow. And altogether, the collection presents readers with snapshots of first days across the spectrum of grades, from stomach butterflies and new-teacher worries to class jobs and making both mistakes and new friends. Song’s watercolor-and–sumi-ink illustrations clearly show the kids’ emotions and some of the sights common to almost all classrooms.

Diverse in so many ways, this could be a springboard to readers’ own poems about school.