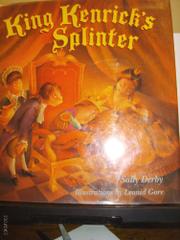 King Kenrick jumps out of bed on Hero's Day morning, only to get a splinter in his toe. Rather than tell the sadistic, tweezers-happy queen about it, he decides to hide the fact. Since his shoes hurt, however, he has to wear slippers, which makes the queen suspicious. She pries the truth from him and is about to get her instruments of torture when the cook, Gloria, tells them of her Uncle Archibald, splinter remover extraordinaire. Uncle Archibald comes and removes the offensive dart, but not without teasing and bullying the king a bit. Kenrick, however, ``wasn't used to having people tell him what to do. (Except for the queen, of course.)'' So when Uncle Archibald finishes his job, the king orders him taken to the dungeon. He's only kidding, though, and Uncle Archibald and he have a good laugh over it. Then King Kenrick puts on his shiny black shoes and leads the Hero's Day parade in style. Derby's (Jacob and the Stranger, p. 843, etc.) little king is adorable; Gore's cartoonish illustrations match the witty tone to a tee. Amusing, especially to anyone who has faced the unhappy tweezers. (Fiction/Picture book. 4-7)