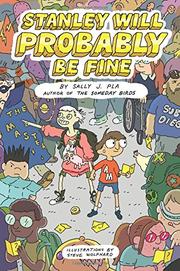 STANLEY WILL PROBABLY BE FINE

Superheroes can be found in unlikely places.

Middle schooler Stanley Fortinbras has a sensory-processing disorder and experiences anxiety, both of which make the principal’s many emergency preparedness drills difficult for him to handle. When he passes out at a safety assembly, he’s sent to school counselor Mrs. Ngozo, an African-American woman, who creates a Ready Room for him: a quiet place where he can go when school becomes too chaotic. It’s here that John Lockdown, hero of the underdog, is born. Stanley, son of a “dark,” Morocco-born French father and white mother, is no superhero, but he does have a superpower: comic-book trivia. When his best friend, Joon (who is Korean), suggests they enter Trivia Quest, a comics treasure hunt that takes place all over San Diego, Stanley’s mind reels with both possible and unlikely worse-case scenarios. After Stanley and Joon have a disagreement, Stanley asks his new neighbor, confident white girl Liberty, to go with him instead. To get through the stress of the day, Stanley creates his own way to manage his out-of-control thoughts and the resultant paralyzing fear: What would Lockdown do? The story never dumbs down or oversimplifies Stanley; he’s a multidimensional character of great depth who gradually learns how to calm his worried mind, and the book avoids patronizing readers with a false sense of everything’s-right-with-the-world.

Add to the growing list of intelligent books about kids whose brains operate outside the norm.