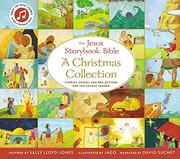 Stories, Songs, and Reflections for the Advent Season

From the Jesus Storybook Bible series

by Sally Lloyd-Jones ; illustrated by Jago

A version of the Nativity story with 10 narrative or musical sound clips followed by abbreviated Bible stories and devotional thoughts for each day of Advent.

Drawn from Lloyd-Jones’ The Jesus Storybook Bible (2007) with some anonymous interstitial text, the stories begin with a young girl “minding her own business” until Gabriel drops in to give her the heads-up: “He’s the One! He’s the Rescuer!” In Jago’s harmonious, cleanly drawn cartoon illustrations, most of the human characters have brown skin in a variety of shades, including (eventually) a brown-skinned baby Jesus, whose head is topped with tight, black curls. The familiar tale continues up to the appearance of “three clever men” from the East (one cued as East Asian with stereotypical Fu Manchu facial hair) in Bethlehem. It is punctuated with pressure-sensitive spots that each activate 15 to 20 seconds of either a well-known Christmas hymn or a reading by David Suchet in a plummy British accent. Twenty-four shorter daily episodes, mostly Old Testament passages with the gory bits left out, follow to offer (purported) prefigurations of God’s “Secret Rescue Plan” as revealed in the New. These range from a massacre-free version of Joshua’s entry into Jericho and (wait for it) “Daniel and the Scary Sleepover” to the parting of the Red Sea, which is incorrectly identified as the origin of Passover.

Tidings of comfort and joy laid on with a trowel but not much regard for texts or traditions.