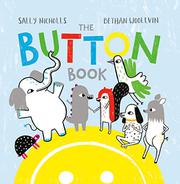 This picture book plays on the universal temptation to push buttons.

A squirrel—presumably the first-person narrator of the book—finds a large, round, red button and wonders what would happen when it’s pressed. The squirrel presses the button, and a large rubber horn pops up and honks: “Beep!” The sound attracts a bird and a dog, and together the three come across a triangular orange button. “What does the orange button do?” they wonder, and they discover that it causes them all to clap. As the picture book progresses, other animals—including an elephant, a tortoise, a deer, and a small dinosaur—join the trio, and together they come across and press a giant hexagonal blue button, a round green button, a yellow button (literally—it looks as though it’s come off a coat), a square pink button, and a small purple button that can only be reached by climbing a ladder. Each of the buttons makes the friends do something different, from singing and bouncing to blowing raspberries. British writer Nicholls’ simple, silly narrative and Woollvin’s colorfully childlike illustrations result in a fun picture book that incorporates shapes and colors and that can be used at home and in libraries and classrooms. Pages are dominated by gray with accents—including the animals’ fur and feathers—changing to match the color of each button.

Should have readers and caregivers singing, clapping, and bouncing along.