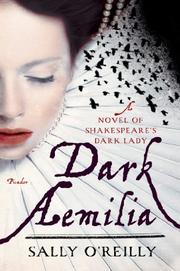 A Novel Of Shakespeare's Dark Lady

Their romance clearly has no future: She is the mistress of the elderly Lord Hunsdon; he is a playwright with little cash and a wife in Stratford. Yet for a few rapturous months in 1592, Aemilia Bassano and Will Shakespeare are swept away by a passion (vividly and earthily described by O’Reilly) neither of them will ever know again. When Aemilia becomes pregnant, she makes the pragmatic choice and convinces Hunsdon the baby is his; he arranges her marriage to a complaisant courtier. Will’s anguish turns to hatred when he walks in on the heavily pregnant Aemilia being raped by the dissolute Henry Wriothesley and takes Wriothesley’s word that it’s consensual. Of course he would believe another man, bitterly concludes Aemilia, who throughout the narrative engages readers’ sympathy with her outrage over the way women are kept down and denied a voice. Ten years later, when desperation to cure her plague-stricken son drives Aemilia to practice black magic, it’s utterly appropriate that she summons the demon Lilith, biblical Adam’s rebellious first wife. (The rather lurid supernatural elements are acceptable in the context of the Elizabethan worldview O’Reilly ably recaptures.) In return for her help, Lilith commands Aemilia to write The Tragedie of Ladie Macbeth, a savage affirmation of women’s power that—you guessed it—Aemilia offers to Shakespeare’s partner Richard Burbage, who promptly turns it over to Will to be remade as Macbeth. It’s an insult even worse than the vindictive portrait of her in his sonnets, but Aemilia and Will still love each other, painfully and without hope. O’Reilly brings her star-crossed lovers together and drives them apart through plot twists that are, for once, credible outgrowths of the characters’ personalities and beliefs, finally giving them a tender, heartbreaking parting.