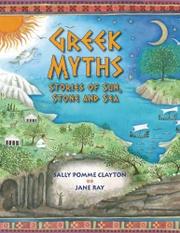 Stories of Sun, Stone and Sea

The fabled world of ancient Greece comes alive through these 10 myths that feature some of the most powerful gods, fearless heroes and amazing animals in literature.

“The Creation” introduces Titans Kronos and Rhea, who spawned the twelve Olympians, led by Zeus, god of the sky, and the collection plunges along from there. Clayton’s deft storytelling transitions readers easily from story to story, grounding them in a setting of mountainous islands dominated by the hot sun and cool blue sea. Readers meet Pandora, created at Zeus’ behest as a tragically curious beauty bearing gifts for the giant Epimetheus. The competition for the city of Athens between Athena, goddess of wisdom, and Poseidon, god of the sea, is seen as a struggle decided by a democratic vote. The grotesqueness of Medusa is countered by the human bravery of Perseus; the remorse of King Midas redeems him from his greed. The enchanting flying horse, Pegasus, aids Bellerophon in his conquest of the three-headed, fire-breathing chimera. Arachne’s transformation following her challenge of Athena brings the collection to a close. Each adventure or quest is followed by a very brief fact about Greece. Detailed and luminous, often diminutive watercolors and collage art illuminate each story’s theme.

A well-crafted, straightforward collection of the myths everyone needs to know.