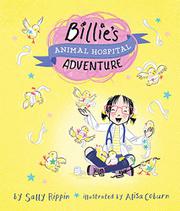 From the Billie's Super-Duper Adventures series

Billie is normally a preschooler set on high speed. She often bounds into school, ready for adventure. But on this particular day, the little white girl limps in, full of woe. She has a scrape on her knee. Brown-skinned Mr. Simon sympathizes with her pain and shows her that Teddy (a stuffed bear) also has an injury. Quick as a wink, Billie and her sidekick pal, Jack, also white, rush off in the cardboard ambulance. As they speed into a cloud of imagination, the classroom instantly transforms into an animal hospital with Dr. Billie and Nurse Jack treating a wide assortment of critters—even a large hippo that has eaten too much ice cream. True to child-doctor sensibilities, many an ailment can be healed with a superabundance of bandages and a spoonful of medicine. Billie and Jack also award star stickers to very brave patients. In the simultaneously publishing Billie’s Outer Space Adventure, Billie and Jack explore Planet Pom-Pom—of course coming up with a “super-duper idea” to save the day when they come across a stranded space tourist. The addition of a few new characters of various skin tones in both books is welcomed.

Brimming with enthusiasm, emphasized words, and silly sounds, these cheery books will have emergent readers clamoring for more.