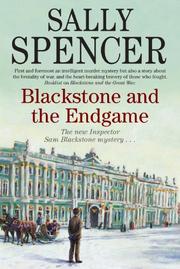 BLACKSTONE AND THE ENDGAME

The Special Branch doesn’t often take much interest in the affairs of Scotland Yard. So Blackstone is astonished and not a little apprehensive when Branch Superintendent Brigham selects him to meet a shadowy informant called Max and exchange an attaché case full of currency for the German Navy’s secret submarine plans. Naturally, it’s a trap. Max disappears with the cash, leaving Blackstone holding the proverbial bag. His pudgy sergeant, Archie Patterson, springs the inspector from jail but lands in the hoosegow himself. Next thing he knows, Blackstone’s spirited away to St. Petersburg by Vladimir, an old comrade at arms, to spend his days near Nevsky Prospekt playing with model trains and waiting for his friend to reveal what nefarious plot he’s hatching. They go club-hopping with members of the royal family and cross paths with a mystic named Rasputin. Blackstone also infiltrates a strike planned by factory workers while he’s serving as bodyguard to Vladimir’s beautiful young agent, Tanya. Meanwhile, Archie, out on six days’ remand, scours London looking for the elusive Max with no official standing and only the help of Ellie Carr, a forensic pathologist and Blackstone’s sometime lover.

Packed with portents, Blackstone’s ninth takes a nicely shaped puzzle and inflates it until it’s as gassy as one of the Kaiser’s zeppelins.