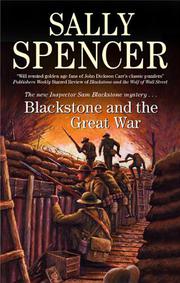 BLACKSTONE AND THE GREAT WAR

Trench warfare takes a back seat to class warfare as Scotland Yard Inspector Blackstone (Blackstone and the Wolf of Wall Street, 2010, etc.) tracks a murderer.

In Afghanistan, many years earlier, Sam Blackstone and General Sir Michael Fortesque had been comrades in arms. Despite cast-iron class barriers, they had admired and respected each other and contributed to each other’s survival. A quarter of a century later, Sam responds at once to the General’s call for help. Lt. Charles Fortesque, his only grandson, has just met death on the Western Front, he tells Sam, then adds, unsettlingly, that he wants Sam to find the killer. He’s convinced of murder most foul and adamant that no one is better equipped than Sam to furnish desperately needed answers. Reluctantly, Sam signs on and ships over to France, where he discovers how remarkably little has happened in the way of social progress. The army’s officers unabashedly view themselves as demigods and enlisted men as scarcely human, both conditions obviously immutable. How dare Sam suggest that an officer, any officer, could be crass enough to betray his class in so homicidal a manner, demands an outraged company commander. To which an unflappable Sam replies that “officers are as likely to commit murder as anybody else, and they’ll swing from a rope as well as the next man.”

Another solid effort from Spencer. It’s great fun to watch the thorny Inspector sass the fatuousness out of snobbery.