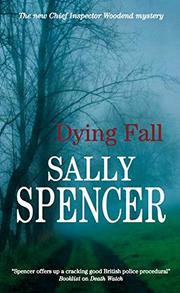 The torching of a tramp sparks tensions among DCI Woodend’s team as they work under the gun to prevent similar crimes.

Charlie Woodend (Death Watch, 2007, etc.) is sure that whoever set Philip Turner ablaze meant more than to kill one poor vagrant. So he doubles the police presence in Whitebridge, bringing down the wrath of Councillor Tel Lowry, who’s promised to lower taxes and whose council seat is threatened by Ron Scranton of the anti-Asian, anti-gypsy, anti-tramp British People’s Party. Woodend sends DC Colin Beresford to infiltrate the gang whose steel-toed bootmarks seem to be all over the crime and asks DS Monika Paniatowski to dig up some dirt that would help him back Lowry off, putting her lovely Polish nose out of joint because she thinks Scranton is where the action is. DI Bob Rutter, meanwhile, is too besotted with trash journalist Elizabeth Driver to be of much use at all. While he’s supposed to be in Abingdon looking into Lowry and Scranton’s RAF careers, he’s really punting down at Oxford with Liz. When the crimes don’t stop, it looks as if all the pints the Drum and Monkey can serve up won’t be enough to get Woodend’s crew back on track.

Spencer isn’t afraid to shake up a reliable formula, bringing novelty to even the most mundane crime wave.