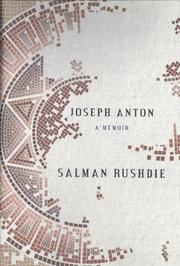 The frightening, illuminating and disturbing memoir by the author of The Satanic Verses, the book that provoked a death sentence from the Ayatollah Khomeini in 1989.

Rushdie (Luka and the Fire of Life, 2008, etc.) chose for his cover name (and for the title) the first names of Conrad and Chekhov—appropriate, for the author seems caught in a tangled novel filled with ominous (and some cowardly) characters driven by an inscrutable fate toward a probable sanguinary climax. The author uses third person throughout, a decision that allows him a novelist’s distance but denies some of the intimacy of the first person. Perhaps he viewed himself during those 13 years (the duration of his protection by British security forces) more as a character than a free agent. He returns continually to an image from Hitchcock’s The Birds: the black birds gradually filling up a jungle gym on a school playground (these represent the threats to personal freedom presented by fundamentalists). Rushdie also includes unmailed letters to actual people (Tony Blair) and to ideas (the millennium). The organization is unremarkable: The author begins with his learning of the fatwa, retreats to tell about his life before 1989, then marches steadily toward the present with only a few returns (a section about his mother’s love life). Bluntly, he tells about his wives, divorces, affairs, successes and failures of pen and heart and character; his various security guards; and, very affectingly, about his two sons. He tells about his travels, many awards and celebrity friends. Emerging as heroic is the United States, where Rushdie realized he could live more freely than anywhere else.

Aspects of a spy novel, a writer’s autobiography and a victim’s affidavit pulsing with resentment and fear combine to reveal a man’s dawning awareness of the primacy of freedom.