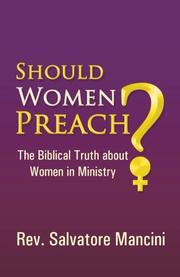 A Christian educator makes the case for female preachers in this debut spiritual study.
Spurred by remarks from fellow Christians that his church’s female pastor transgresses biblical teachings, Mancini deconstructs two often-cited passages from the Bible that directly address women and prophesy. In context, the Timothy passage describes the domestic sphere, with verses that call for women to “learn in silence” and not “to teach, nor to usurp authority over a man’s authority.” Mancini speculates that to learn in silence means to learn with humility, rather than literal muteness or conjugal submission. He indicates that the warning against usurping reflexively refers to men, because neither partner should dominate the other. Instead, he surmises, men and women should work together as one, as in the image they were made in the form of Adam and Eve, subject to only the Lord’s teachings. The second verse Mancini examines revolves around two selections from Corinthians. Mancini places these verses in a historical context, arguing the admonishment of women speaking in church specifically chastises Corinthian women. Citing biblical evidence that Corinthian women were rebuked for being immodest, he suggests they may have also been especially gossipy, distracting from the church’s focus on spiritual matters. He encourages male and female followers to keep the church’s focus on Christ and to leave outside interests at the sanctuary door. This somewhat flimsy reasoning characterizes the book’s conclusions, but Mancini makes clear his earnest support of women as Christian leaders. In addition to adding a measure of cadence, underlined phrases from quoted verses emphasize key diction that Mancini uses to construct his case. That rhythm, coupled with Mancini’s use of second person, give passages a tone closer to a preacher’s sermon than an academic’s explication. His folksy asides about women’s inane chattiness—“let’s face it, if we get a bunch of ladies together and they start giving their opinions, it can turn into ugliness and confusion”—and men’s tendency to dismiss women’s contributions do little to encourage a feminist approach to Christianity, but this slim volume may start the conversation.
An enthusiastic, if not erudite, inquisition of biblical support for women’s leadership in the church.