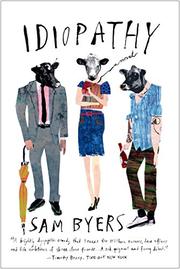 A darkly comic novel turns bleaker and sadder as a generation of perennially adolescent Britons struggles to find love, or meaning, or maturity or something.

The front page of the debut novel by Byers defines “idiopathy” as “a disease or condition which arises spontaneously or for which the cause is unknown.” It refers most specifically to a crisis which pervades England, initially referred to vaguely and obliquely as “all this terrible cow business” and “whatever was going on with the cattle.” Worse than mad cow disease and capable of crossing species, infecting sheep and even humans, it hovers in the background of the novel, which focuses on the relationship (or lack thereof) among Katherine, Daniel and Nathan, who are stuck in some gaping maw between mindless adolescence (which seems to extend well into the mid-20s) and adult responsibility. On the surface, Katherine is the most interesting and least likable: “The better she was at her job, the more people hated her. By general consensus, Katherine was very good at her job.” She has sex, indiscriminately and without any satisfaction, with some co-workers who hate her less (or at least differently) than the others, and perhaps she does so to fill the void left by her breakup with Daniel, though when the two were lovers they never seemed to like each other much. Observes their friend Nathan, “[o]n a good day, they drew on pooled energy. On a bad day, they battled for dwindling air.” Nathan has recently been released from psychiatric treatment following his attempts to really hurt himself (though not, he insists, to kill himself) after professing his love for and to Katherine. He may well be the sanest of the three. They inevitably reunite, after the reader has spent long stretches inside the consciousness of each, as the gathering unexpectedly encompasses Daniel’s blandly beautiful girlfriend and the man with whom she might be having an affair, in a climax that suggests a younger version of Edward Albee’s Who's Afraid of Virginia Woolf?.

Throughout, words are platitudes, words are weapons, words are what distinguish this generation from the diseased cattle across the novel’s backdrop. Perhaps. Here’s hoping the promising novelist finds a depth of meaning that eludes his characters.