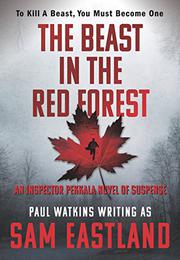 THE BEAST IN THE RED FOREST

The troubled and troubling Inspector Pekkala returns from exile to find himself trapped between giants at the end of World War II.

For U.S. readers, this may be a confusing relaunch of a dynamic World War II spy series, but it’s bound to make those new to Eastland (Archive 17, 2012, etc.) seek out his other books. To clarify: This is the fifth Inspector Pekkala novel, released by new publisher OPUS, but the fourth book in the series, The Red Moth, will be published after this one. Add to the confusion the fact that British spy novelist Eastland has been newly revealed as a pseudonym for American literary novelist Paul Watkins (Ice Soldier, 2005, etc.), and it all gets a bit murky. To catch up, Inspector Pekkala is a Holmes-ian fellow who was once personal detective to Czar Nicholas II and now reluctantly works for the Communists. As the book begins circa 1944, Pekkala has disappeared at the Western front and is presumed dead. Refusing to believe the inspector has perished, Josef Stalin assigns Pekkala’s best friend and assistant, Maj. Kirov, to seek him out. While Kirov searches for Pekkala, Eastland also unfolds the eerie tale of William Vasko, a New Jersey steelworker who comes to Russia in 1936 seeking work and becomes trapped behind the growing veil of Soviet secrecy. When Pekkala surfaces, he's stalked by an icy German assassin who wants personal revenge, and he joins forces with a partisan warlord in an attempt to mitigate the bloody violence between the Russians and the partisan movement in the Ukraine. In a smart move, Eastland depicts his fictional Stalin as more than a James Bond villain, painting him as a conflicted, lonely tyrant whose retribution against slights both real and imagined makes him a very dangerous opponent.

A complex and atmospheric thriller—perhaps not the best jumping-on point but a satisfying entry in a standout historical series.