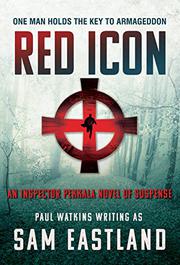 A sixth entry from the case files of troubled Finnish detective Inspector Pekkala.

This is another exciting historical thriller from the prolific Eastland (The Beast in the Red Forest, 2014, etc.), the pen name for American literary novelist Paul Watkins (Ice Soldier, 2005, etc.). This entry finds Pekkala working in two eras. We first meet him working as Czar Nicholas' right-hand man in pre-Revolutionary Russia, a role that puts him in the middle of political intrigue and pits him against the mystic Rasputin, who entranced the czar’s wife with his care of their hemophiliac son. The other strand of the book takes place in 1945 as the war rages on and Pekkala is one of Stalin’s most trusted investigators. The item linking these two sides of the story is a rare icon called “The Shepherd,” which Pekkala believed was destroyed by a mad priest in 1914. When two Russians discover the icon in a grave in a country church outside Berlin, the dictator orders Pekkala to investigate its authenticity. What doesn't change between the two stories is Pekkala, with his fierce intelligence and wounded heart. “There are some things from which a man does not recover,” Eastland writes. “There is no hiding place deep enough inside the catacombs of his brain where he can hide the memories. They will always find their way out, baying like wolves in the black tunnels of his mind until they reach the light again. The only thing that he can do is let them come, fighting the nightmares until even the demons which brought them grow sick of the carnage.” The author takes his fragile hero down some impressively murky tunnels as Pekkala tracks the icon’s origins to a creepy, true-life secret sect of Russian outcasts known as the Skoptsy, or “castrated ones.” Worse, the madmen have gotten their hands on a little-known German nerve agent called the Sartaman Project and are threatening to use their weapon of mass destruction.

Another rousing wartime thriller that gets its facts and its storytelling right.