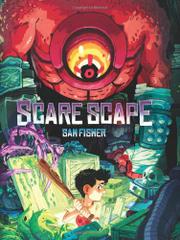 Wishes can come back to bite you...especially when they’re granted.

Morton Clay, his 13-year-old brother, James, 16-year-old sister, Melissa, and their widowed father, a British astronomer, move to Dimvale to escape light pollution. Dad has bought their new home sight unseen, and it’s pretty dilapidated. Morton, who loves the Scare Scape comics, thinks the house is cool; his quarrelsome older siblings don’t. When the trio finds a buried gargoyle statue promising wishes when its fingers are broken off, all three make wishes in haste. When those wishes come true, the warning on the statue—“Choices made without due care / Will plague forever—friend, beware!”—is quickly borne out. Morton’s monster toys come to horrifying life. Melissa’s closet becomes infinite (and full of monsters). Most terrifyingly, James can’t remember what his wish was. With a couple of new friends in tow, they discover they’ve moved into the house owned by the deceased creator of Scare Scape...and researching him may be their only chance of reversing their frightening wishes. Canadian screenwriting professor Fisher’s debut’s an imaginative, not-too-dark urban fantasy. Characters are refreshingly realistic, though some of the real situations are less so. A 40-page introduction to the beasts of Scare Scape appearing at the front will entice even reluctant readers to try the novel.