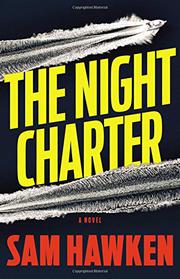 Camaro Espinoza fled New York after killing five evil men (we never learn any more about this; maybe in a later volume?) and ended up in Miami, where she’s built a business as a charter boat operator. She takes the Annabel—a 50-foot fishing boat—out in the deep seas around the port city for fishing groups by day or by night. When Parker Story, a down-on-his-luck ex-con who's trying to lift himself and his 14-year-old daughter, Lauren, out of poverty, shows up with a proposition, Camaro is sure there’s a catch, and she’s right: Story’s acting as frontman for the mean-spirited Matt, another former convict. Matt and his cronies have been hired to smuggle a man out of Cuba. Only problem is that Matt, who was involved in a pawnshop robbery in which three men died, is being watched by a Miami Police detective. Although she has misgivings, Camaro decides to go through with the pickup in order to help Story, but when she does, everything goes sideways, and she soon finds herself on the run with a teenager in tow and both the police and bad guys on her trail. Hawken’s a good writer, and, except for an occasional creative verb, he keeps his prose lean. And Camaro is a worthy protagonist, someone who will resonate with readers over many volumes. However, there are some stumbles in the plotting. For example, Camaro seems much too smart to get involved with Story’s scheme, and her violent nature is somewhat puzzling. It’s also implausible that the powerful men who hire Matt and his crew would resort to a two-bit criminal rather than simply doing it themselves.

A well-written novel, but the intricate plot teeters precariously on a rash of bad decisions made by otherwise street-smart people.