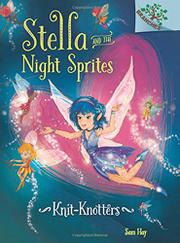 From the Stella and the Night Sprites series, volume 1

Stella encounters the night sprites, mischievous nocturnal beings that steal socks, hide the caps of markers, and knit children’s hair into knots, among other mild wickednesses, in this series opener.

Stella's dubious enough about getting her first pair of glasses that her mother's declaration that her hair is so knotted it will need to be cut comes as a real blow. How will anyone recognize her? Furthermore, her new glasses aren't nearly sparkly enough. But a mysterious, colorfully dressed woman who claims to be much older than she looks waves a wand, and suddenly Stella's specs are satisfyingly sparkly. She likes the new crispness of the world she sees and how easy it is to read now. That night, her glasses also reveal Trixie, a knit-knotter whose job is snarling her hair. It seems there's a hairy-fairy in town who's in league with the knit-knotters to drum up business for her new salon. Can Stella convince Trixie not to knot her hair and thereby spare her a haircut? Hay's premise is mildly beguiling, but her worldbuilding is arbitrary and incomplete—likely due to the need to develop further night-sprite stories. While she evokes the experience of the change wrought by a new pair of glasses well, the plot as a whole is less than compelling, and characterization is thin.

This slim chapter book has an even slimmer foundation.