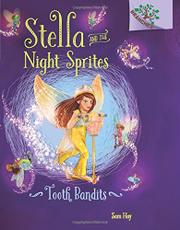 From the Stella and the Night Sprites series, volume 2

Stella and her magic glasses are back in a new adventure about the mischievous little creatures that come out at night.

After meeting the Knit-Knotters (2016), Stella’s eager to see more of the night sprites, but when a friend loses a tooth at a sleepover, Stella hopes she’ll see the Tooth Fairy herself. What she sees, however, is a scooter-riding tooth bandit out to steal her friend’s coin from under her pillow and to replace it with a pencil sharpener. Hoping to guard against theft when her own loose tooth falls out, Stella visits the proprietor of the bead store, whose wand invested her glasses with magic in the first place. Now armed with a tiny whistle bead, Stella misses the Tooth Fairy but wakes up in time to meet tooth bandit Piper, who wants Stella’s coin to decorate her scooter. Some beads and a glue stick help Stella divert Piper from her coin. Summoning all the bandits with her whistle, Stella ends the depredations of the tooth bandits forever by showing them how to use beads to decorate their scooters. While Stella’s adventures have potential, they are dragged down by an excess of exclamation marks, wooden dialogue, and resolutions that come far too easily. The night sprites are developed with such dogged commitment to cuteness that they feel as manipulative and plastic as the pink aisle in a toy store.

As substantive and satisfying as cotton candy.