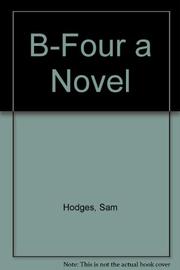 A mildly humorous but mostly unexceptional debut from newsman Hodges about his home turf, Birmingham, Alabama, and a cub reporter learning the ropes at the local paper who finds—all at once—love, the will to defy his tyrannical father, and a front-page story. Forced to accompany his banker father on weekly Civil War reenactments, young Beauregard Forrest specializes in realistic battlefield deaths but aspires toward loftier goals. He owes his job to parental string-pulling, and so suffers the scorn of fellow reporters and the city editor, who assigns him the obits, Metro briefs, and Pet-of-the-Week fluff that earn him the sobriquet ``B- Four'' (derived from the inner recesses of the paper where his work always appears). However, with help from a sympathetic senior colleague he begins to make headway as a newshound, first stumbling onto a story about madcap Birmingham boosterism in the form of an orchestrated rush-hour tie-up in rival Atlanta. Scooped by the Associated Press, he rebounds by falling for an eccentric poetry student who leads him to a scandal involving a portable classroom used as a hunting lodge for school officials, this in a time when space limitations force children to be taught on an auditorium stage. The romance proves rocky, but he perseveres, getting both his story and the girl in the end. Meanwhile, much of the novel hinges on banalities: Will Beauregard take the SAT test for entry into the college of his father's choice? Will he tell his new love about these plans? How many cups of coffee will he consume? Colorful and charming in distinctly southern ways, but ultimately disappointing: a standard tale of bright futures and saccharine sentiments.