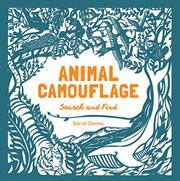 A Search and Find Activity Book

A collection of international animals is concealed in a series of complex pictures. Search and find!

Hutchinson proposes taking readers on a trip around the world. He separates the Earth into seven regions. For each, there is first an overview of the topography and climate as well as short descriptions of the many animals indigenous to the region. Then, a double-page spread features a pair of challenges. On the left (taking up about one-quarter of the area), several animals are depicted clearly against white space. A wide, striking, and complex monochromatic cut-paper illustration of a typical habitat fills the rest, dizzying readers with the interaction between negative and positive space. Readers are challenged to find both animals from the left sidebar and additional ones according to specific directions. The African animals feature some with horns. Some of the Asian animals use their front legs like arms. Europe boasts a wide variety of birds. Many animals in the polar regions lay eggs. A lot of the animals in South America are denizens of the rain forest. The duck-billed platypus is not the only “Australasian” animal with a bill. A final page includes a fun fact about each of the seven regions (one is that there are 61 Australasian animals with bills). Hutchinson succeeds beautifully in making learning fun. Dennis’ distinctive cut-paper illustrations are suitable for framing and intricate enough to reward repeat viewing. Each of the seven regions is depicted in a different color.