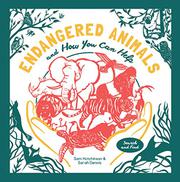 And How You Can Help

Arranged along the lines of their previous search-and-find outings, Animal Habitats (2019) and Animal Camouflage (2017), the book presents a sampling of the endangered animals found in each of seven generic habitats: rainforest, desert, ocean, savanna, mountains, forest, and polar. Dennis highlights Hutchinson’s brief introductions to select wildlife first with a set of technically adroit individual cut-paper portraits and then, with a page turn, a challenging full-page collective tangle of flora and fauna tailor made for poring over. The author hasn’t really done his homework, as he hilariously mischaracterizes the black rhino as a “gentle giant” and also supplies incorrect “Red List” ratings for several entries, according to the International Union for Conservation of Nature. Furthermore, of the nine chosen examples in each group, two or three at one end of the spread are rated “least concern” or “data deficient” (and therefore quite possibly not threatened) on the IUCN List, and one or two at the opposite end are already “extinct” or “extinct in the wild”—which rather cuts down on the number of creatures on display that are actually endangered. Poor copy editing also compromises the presentation’s effectiveness.

Weak of content but heartfelt of tone and with eye-catching illustrations.