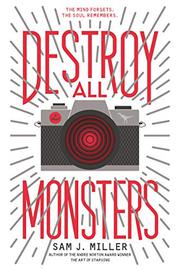 Four years ago, when best friends Solomon and Ash were 12, something happened that neither remembers.

The two reacted in very different ways: Ash struggles with depression, and Solomon has succumbed to serious mental illness. He dwells in Darkside, where dinosaurs live alongside humans and othersiders, humans with magical powers. In Darkside, Ash is a Refugee Princess under a spell, and Solomon has a crush on her bodyguard, Niv, who for safety has moved her from one undisclosed location to another ever since the riot when othersiders and humans clashed. In Ash’s reality, she attends Hudson High, where her Solomon sometimes attends class and his stepfather, hunky Mr. Barrett, is football coach and vice principal. She also hooks up with Connor, Solomon’s stepbrother. In Solomon’s world, a wave of anti-othersider violence coincides with vandalism and dangerous pranks in Ash’s, and the time the friends spend together in both places jars memories of the traumatic event that shattered their lives. Is it possible that their struggling friendship could be instrumental in saving two worlds? Miller (Blackfish City, 2018, etc.) delivers a tale of friendship and dovetailing realities: Each teen narrates from their own reality in alternating chapters, and the two narratives bleed into one another in a way that at times borders on confusing. The worldbuilding in Darkside will feel familiar to fans of fantasy. Ash is white; Solomon is white and Jewish.