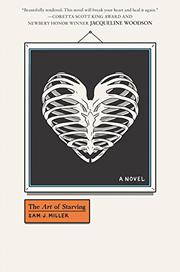 THE ART OF STARVING

A bullied gay boy harnesses trippy, starvation-induced powers to avenge the disappearance of his beloved sister.

Gay, Jewish, white, self-deprecating Matt hates his name but hasn’t changed it because honesty is the best policy. And he is honest, quickly establishing that he has suicidal thoughts and homicidal reveries and his family is at the bottom of the financial food chain. That forthright tongue isn’t fully reflective though, refusing to admit that his body dysmorphia and calorie counting = eating disorder. When he discovers that extreme starvation heightens his senses, the world around him begins to clarify (he can follow scents like a hound and read minds like a clairvoyant as his body slowly degenerates). Convinced that a triptych of king bullies, one of whom is dark and dreamy Middle Eastern Tariq, on whom he hates having a massive crush, is responsible for the disappearance of his older sister, Matt focuses his supernatural gift on them, hoping both to find his sister and to systematically destroy the high school ruling class—even if Tariq might secretly be into him. In first-person journal format, Matt schools readers on the art of starving as he toes the line between expiration and enlightenment, sparing no detail of his twisted, antagonistic relationship with his body. Matt’s sarcastic, biting wit keeps readers rooting for him and hoping for his recovery. In his acknowledgments, Miller reveals the story's roots in his own teen experiences.

A dark and lovely tale of supernatural vengeance and self-destruction.