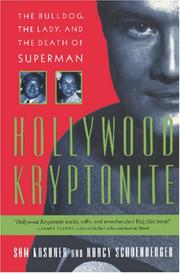 The Bulldog, the Lady, and the Death of Superman

A muddled look at the mysterious death of George Reeves, the first Superman, by poets and Hollywood buffs Kashner and Schoenberger (coauthors of A Talent For Genius: The Life and Times of Oscar Levant, 1994). The strong-jawed Reeves's real superpower seems to have been a capacity for alcohol. He also carried on a long affair with Toni Mannix, an older woman married to studio exec Eddie ``Bulldog'' Mannix, who approved of the affair. Reeves and Toni set up house in Benedict Canyon and generally lived a contented, suburban life, except for the 13 weeks in which Reeves was required to wear a blue and yellow padded suit and perform wonders on television. Reeves was a quiet fellow, well-liked on the set, though at times he was irritated by his brand of fame (he once greeted a young female fan, ``Hello, you little ovary clanker!''). But ten years into his affair with Toni, which the authors evoke with real tenderness, Reeves met Leonore Lemmon, a blonde party girl with an appetite for aging stars and gin. Toni was devastated by the breakup—by some accounts, she even had Reeves's beloved schnauzer put to sleep—and her incessant phone calls disturbed the new lovers day and night. Within a short time, Reeves was dead, apparently committing suicide in his room during a cocktail party on June 16, 1959. But rumors of a gunman persist—though just when the plot gets interesting (for Reeves comes off as little more than a cardboard figure, greatly overshadowed by his two lovers), the book becomes unhinged. The various accounts of Reeves's death are poorly presented—who was at the party? whose gun was it?—and characters flit in and out. The authors conclude it was murder, but they never assemble the pieces of the mess into a full and coherent picture. A sad life and death in Hollywood, but the gossip isn't much and the promising title turns to leaden prose.