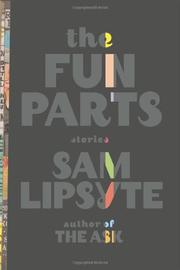 Freaks, misfits and addicts crowd this second collection from Lipsyte (The Ask, 2010, etc.); his stories are beyond mordant.

An older man abandons his dying wife for his girlfriend in "The Worm in Philly." Lipsyte’s characters inhabit a cold, hard world, but Tovah Gold is desperate to fit somewhere, somehow in "The Climber Room." The preschool teacher, still single at 36, wants a baby. Her fantasy of marriage to the school’s richest donor crumbles when the old goat starts out by masturbating. (If you’re wondering about the collection’s title, check your body.) The situation of Mandy, in "Deniers," is even more dire. A recovering addict, she has just extricated herself from a destructive relationship with a fellow addict when she becomes involved with her stalker. Cal, with his violently anti-Semitic past, is hardly an appropriate mate for a nice Jewish girl. That stalker seems tame compared to the prize freak in "The Wisdom of the Doulas." Mitch is an overweight, potty-mouthed “lactation consultant” who assists postpartum mothers. Problem is, Mitch wants some of that mother’s milk for himself. It gets physical between him and the outraged father; violence is a constant in Lipsyte’s world. "The Republic of Empathy" ends with an inoffensive young father being burned to a crisp in a drone attack; yes, folks, drones are coming to an American neighborhood near you. What Gunderson fears, in "The Real-Ass Jumbo," is that the whole world may end. The newly minted prophet gives us about five years, “time enough to sample all the yearning young hippie tang.” This scintillating black comedy ends (surprise) violently. There are times, though, when the violent ending seems willed and gratuitous. The high school coach in "Ode to Oldcorn" is a fervent admirer of the champion shot putter. Was it really necessary for their reunion to end in broken bones?

That forcing and a tendency to pile on are the only things preventing the dark vision of this smart, hip, supertalented writer from being truly memorable.