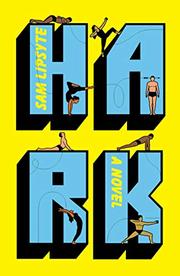 A reluctant messiah inspires people to focus in a time of chaos.

Lipsyte (The Fun Parts: Stories, 2012, etc.) assembles a motley ensemble for his first novel since The Ask (2010) put him squarely on America’s literary map, but it’s mostly a sour, disaffecting experience that’s reflective of our troubled times. The novel’s central character is a guru-light type named Hark Morner who preaches a New Age–y discipline called “Mental Archery,” a goofy combination of mindfulness, made-up history, some yoga, and visualizations based around archery. Unfortunately, Lipsyte assembles his story through the point of view of the supporting characters, most of whom are miserable misanthropes when they’re not around Hark. The author’s primary avatar is Frank “Fraz” Penzig, whose primary characteristics are being the “old guy” at 46 years old, locked in a miserable, combative marriage with his wife, Tovah, and father to two kids. Also floating around is their patron, Kate Rumpler, who’s a felon due to having offed her pervert uncle and supremely rich since her parents crashed their private plane, and Teal Baker-Cassini, the intellectual who lends Hark’s harebrained discipline some credibility. There are no real villains here, barring the tech titan who wants to commercialize Hark’s movement and a weird cult that shows up late in the game to oppose it. As usual, Lipsyte’s command of language is sublime—Hark’s directive to “Actuate the world” could come straight out of the Silicon Valley parodies that are so prolific lately—but the dubious premise and deeply unlikable characters sour the already-tart satire that the author is proposing. The book has its twists: After Hark has a meltdown in St. Louis and one of the cast members suffers a potentially heartbreaking grievance, there’s an opportunity to shift the narrative to a more believable scenario, but instead the story descends into its own sad, inevitable stew of nonsense.

Magical realism works great for some authors, but Lipsyte ends up closer to the ending of the television show Lost than to any substantial prosecution of contemporary society.